Ukrainian fighters returned with a triple victory from the Abu Dhabi World Cup!

Young sportsmen from the SC «Borets» / ZR Team – Serhii Krasovskyi and Serhii Rusnak became the world champions 2017 among the Juveniles at the Jiu-Jitsu Championship in Abu Dhabi!About seven thousand sportsmen of different age groups from more than 100 countries around the world have visited Jiu-Jitsu Championship that took place in Abu Dhabi. Ukrainian fighters went to the capital of the United Arab Emirates with a competitive spirit and being highly trained. At the championship 14-year-old Serhii Krasovskyi and Serhii Rusnak had four fights and won all of them confidently.

The team coach Ievgen Skyrda says: “We coped with the task 100%! Despite the fact it was the first championship of such high level for our guys they coped with nervousness and showed the real power of the Ukrainian fighters”.

Previously a run of success was opened by 7-year-old Nikita Petushinskyi. He is also a part of the SC “Borets”. He became the world champion in his age group at the Abu Dhabi World Jiu-Jitsu Championship 2017. 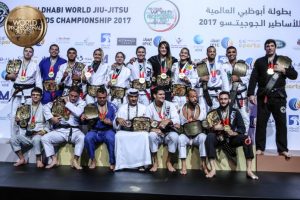 The victory of Ukrainian athletes was well-earned – sportsmen were constantly preparing for the championship. The coach Ievgen Skyrda says: “They are so selfless in the gym – trained daily (during the school holidays even twice a day). So now we could see a good result. We are so proud that the Ukrainian flag was raised to the highest stage of the pedestal in Abu Dhabi. Many thanks to everyone for their support. I also wish to express my gratitude to our sponsor – “BioTexCom”!”

As a reward for the victory at the Abu Dhabi World Professional Jiu-Jitsu Championship, 14-year-old Serhii Krasovskyi and Serhii Rusnak will receive monthly financial support from the team’s sponsor “BioTexCom” company.

But this is only the beginning and the Ukrainian champions will not stop. Sportsmen are waiting for the Asian Open Jiu-Jitsu IBJJF Championship which will be held in early September in Tokyo, Japan. “BioTexCom” confirmed the funding of the Ukrainian team and it means that soon at the homeland of jiu-jitsu people will know about the Ukrainian athletes!