Mastery and knowledge of technique are determined in terms of number of techniques, which sportsman can perform, and also the level of skills, which can be demonstrated during the sparring and competitions. Wrestlers are encouraged for adaption of techniques to their type of constitution, strategic priority and level of athleticism. The final criterion is the ability to perform a successful technique, and not just a strict technical aptness.

Request for belt getting can be given after successful result during the competition. Especially it concerns to the lower levels of belts. The belt can be also given to athlete who has beat out all athletes of his level and begun to win some athletes of the next level. For example: sportsman with white belt beats out all owners of white belt and also some of blue belt owners.

Teachers can also take into account behavior of sportsman outside the sport club. If his behavior has anti-social and destructive tendencies teacher can refuse to give the belt. Just taking into account these and other criteria most of teachers promote their sportsmen. Some sport schools can also conduct formal examination – oral or written exams. 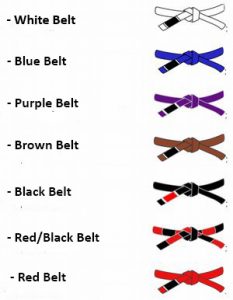 Blue belts are never given to athletes who are under the age of 16. According to the regulating documents of the International Federation of Brazilian jiu-jitsu, sportsman must be at least 19 years old in order to get a black belt.

Some of sport schools also use stripe system to determine the growth of wrestlers’ skills. Stripes can be given to any belt below black one. As well as belts, stripes are given at the discretion of teacher for strong progress or victory in the tournament for example. However, not all schools give stripes or give them consistently. Thus, the number of stripes not always indicates the level of athlete’s skills. This system is used as a guide for beginners, because they need to get four stripes in order to reach the next belt.

Like
Previous Story:
BJJ Point System
Next Story:
Bernardo Faria Hints at Retirement & Opening His Own...